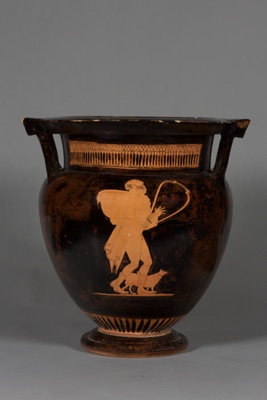 About this objectThe column-krater, which would have been used to mix wine and water at a symposium, gets its name from the horizontal handles on the level of the rim which resemble architectural columns.

The Harrow painter was a student of the Berlin Painter, one of the greatest red-figure artists of the early 5th century BC. Our column-krater shares many of the features of the Berlin Painter's work, most noticeably as we see here a single figure on either side of the vase decorated with dilute glaze and spot lit on a black background.

On Side A is an ageing male moving right, playing the barbitos (a stringed instrument) and with a food-basket slug over his shoulder. He is balding and has a rather bent nose. A small dog, possibly a Maltese, walks next to him at his feet. The man wears a cloak about his upper arms and left shoulder, and wears soft boots on his feet. He sings, mouth open and head tilted back. Wrinkles are drawn in lines running back from his forehead and from his nose under his eyes. His beard and the hair on the back of his head are painted with short strokes of dilute glaze. There are traces of preliminary sketch marks. There are faint remains of an inscription coming from the old man's mouth, but the letters are difficult to make out with certainty.

The relationship between the men on each side is not clear. The youth gives the impression of intended escape; on the other hand the older man seems unconscious of the youth and wrapped in his song.

MakerAttributed to the Harrow Painter

Inscription and MarksThere are faint remains of an inscription coming from the old man's mouth, but the letters are difficult to make out with certainty