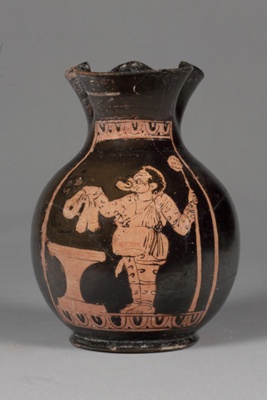 About this objectThe oinochoe jug's name was derived from its function, pouring wine. Oinochoe came from the Greek terms οἶνος, meaning "wine", and χέω khéō, meaning "I pour."

On this jug is a scene with a comic actor standing before a louterion (water basin) and holding a tasselled sash with dotted decoration. He is wearing a mask, and holds a thyrsos. A thyrsos is a staff associated with the god Dionysos (sometimes spelled Dionysus) in his left hand. Relief line is used for details but there is no relief contour. The eyebrows of his mask were outlined in added white, but are now worn.

There are bands of egg and dot above and below the scene with simple bounding lines at the sides. There is some evidence of a preliminary sketch for both the figure and the water basin.

The slave seems to have been a favourite character in comedy at this time and later, in part because, as non-citizens, they could get up to all sorts of mischief outside the bounds of proper behaviour for a citizen. For this reason, the slave-mask came to represent comedy in the popular imagination from the 4th century BC onwards. However, in vase painting, the slave and his master can be mistaken for one another, as the on-stage colour variations are more difficult to depict. The best way to identify a slave from his master is the condition of his hair. A slave's hair is always unkempt and bristly.

Small jugs will this kind of decoration are not uncommon and many seem to be associated with the workshop of the Truro Painter, although this jug has not been associated with him officially.