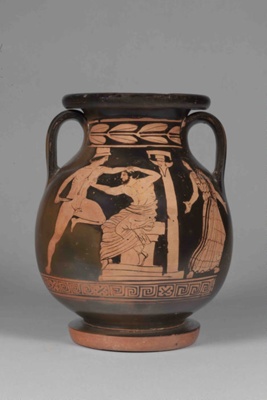 About this objectThis pelike, used for storing wine or water, is similar to an amphora in purpose and style; however, unlike an amphora, this vase flanged so it can stand on its own.

Side A of the vase depicts the death of Aegisthus. While Agamemnon was at the Trojan War, his wife Clytemnestra took Aegisthus as a lover. When Agamemnon returned to Mycenae, the pair murdered him in his bath and went on to reign over the city. Their reign, however, only lasted eight years because Agamemnon's son Orestes murdered them in retaliation for his father's death. The painter has captured the moment just before Aegisthus' death, revealing the rage of Orestes and the fear of his victims. Aegisthus sits on an altar in the centre, looking as though he was seeking refuge, with a hand reached out towards his stepson. On the left is Orestes, naked but for the pilos (a conical felt cap, often worn by travellers) on his head. He holds a machaira (dagger) in his right hand and seizes Aegisthus by the hair. The figure of Aegisthus wears a himation (cloak) that has slipped down to his waist and sandals on his feet.

Meanwhile, a female figure flees to the right with a gesture of despair and an expression of fear on her face. She is most likely meant to be Clytemnestra, running from her son, but Orestes' sister Electra is another possibility. She wears a decorated peplos. Behind the altar is a column with a boukranion (sculptured ornament of an ox skull) hanging from it.

Meanwhile, Side B shows a scene with three cloaked youths. There is no myth associated with the trio and it may merely be a calm scene, meant to provide contrast to the intensity of the other side.

The vase is attributed to the Vaste Painter, who was a follower of the Amykos Painter, but his style is cruder than that of his teacher. The vase painter may have been inspired by the play 'Electra' written by Euripides in ca. 410 BCE, in which the hero Orestes kills Aegisthus at an altar.

MakerAttributed to the Vaste Painter

Subject and Association KeywordsViolence in art