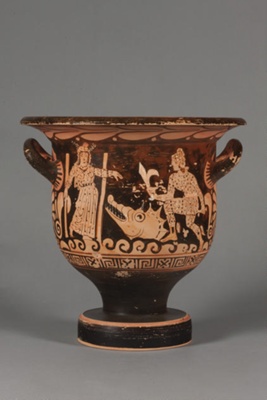 About this objectThis vase, named for its bell-shaped body, was used to mix strong wine and water at the symposium, or Greek drinking party.

Side A shows the mythic scene of the hero Perseus saving the princess Andromeda from a sea monster. Andromeda was set up as a sacrifice to the sea monster after her mother Cassiopeia boasted that her daughter was more beautiful than the Nereids. In revenge, Poseidon sent the monster to attack the coast of Aethiopia and the Oracle of Apollo claimed that the only way to rid them of the monster was to sacrifice Andromeda. In this scene Andromeda is tied to two posts while the sea monster looms out of the sea to her right. Perseus, on his way home from battling Medusa, flies down on the right. He has his harpe, a sword with a sickle protrusion along the edge of the blade, and wears a felt traveller's cap, known as a Phrygian cap.

The other side of the vase is relatively calm by comparison. A youth stands with his right hand to his hip. He wears a himation (cloak) over his left shoulder and in his left-hand he carries a decorated staff. He also wears a wreath with white dots washed over pink. A woman addresses him with her right hand outstretched. She wears chiton and himation. She too has a wreath with white dots, a necklace with black and white dots, and a bangle is shown in white.

The scene on Side B is more expressive than one usually finds in depictions of this kind: the painter must have been wanting to enliven a tired formula. The young woman's gesture has the palm upright. In Greece, this gesture was used to ask for something, whether something concrete or metaphorical, like sympathy. The young man responds with a different gesture, which implies rejection. Interestingly, the hand on hip in this way is more associated with females. It tends to be shown in the context of an argument and can be read as unbudging.

Below the handles are palmette and tendril designs. Below the scenes and running all around the vase, is a band of alternating meander and saltire squares.

Subject and Association KeywordsHeroes in art