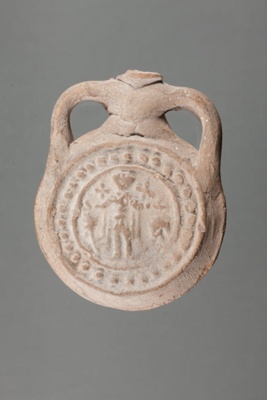 About this objectFlasks or ampulla like this one, also known as Pilgrim Bottles, were made at shrines of pilgrimage as souvenirs and gifts for the pilgrims to return home with. These flasks were usually filled with holy water or oil from the site. Often these souvenirs were mass-produced, and could be put together quickly, such as our flask, where the join between the two halves has been only roughly smoothed together.

This particular flask features a moulded relief scene of Saint Menas on both sides. St Menas is shown with a cloak hanging from his shoulders, and has a miniature camel on each side. There are two crosses in the background, one over each shoulder. The scene is bordered by a circle of dots. This flask is made of pale orange-brown clay, with two looped handles. A thong or thread would be looped through the handles to allow pilgrims to carry the flask around their neck.

The history of St Menas appears to be a combination of an early Egyptian Menas with a later Roman soldier. The myth tells of a Roman soldier who was martyred for being a Christian. He was killed in Phrygia at or near 303 AD, and was carried to his burial site by two camels, which are shown in most representations of the saint. His shrine in Karm Abu Mina became a popular pilgrimage site with a sanctuary and baths. The remains of St Menas were believed to bring considerable healing from sickness, and his early life as a camel driver and leader of camel trains linked him to protection of transport. Many modern day taxi drivers still value his protection.