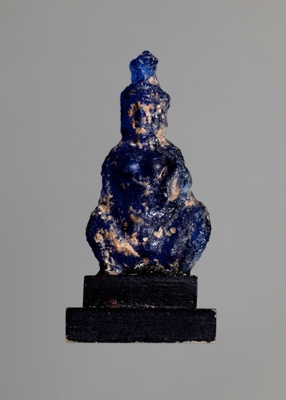 About this objectA miniature Egyptian pendant amulet in translucent dark blue glass showing a naked squatting female with large round breasts and hands clasped over her belly. She is wearing an elaborate frog-shaped headdress, which doubles as a point for hanging the amulet. The squatting form and intentionally dimpled back and headdress of the figure also make the figure resemble a frog.

This is a representation of the Egyptian goddess Heket, who is often shown as a frog, or as a woman with a frog's head. Heket was associated with childbirth, and particularly the later stages of labour, when women would squat in the same position to give birth. Women would have probably worn amulets like this on while giving birth.

Frogs were associated with regeneration and fertility, since they seemed to generate spontaneously from the mud along the Nile after the floodwaters receded. Frog amulets have been common from the early Predynastic period, becoming popular in the Old Kingdom, and still found in use during the Ptolemaic period (from around 4000 BC until 30 BC). The amulets are usually blue or green, made of faience, glass, or green coloured stones like jasper.

Credit LineOn loan from the collection of Katherine Adshead, 1973