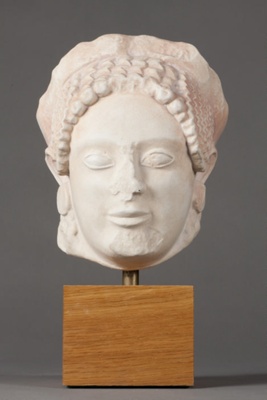 Name/TitleMarble Head of a Kore from Eleusis

About this objectBeing smaller than life-size, this kore was most likely a dedicatory statue within the fortifications of Eleusis, a sanctuary dedicated to Demeter and Persephone, which was constructed in the sixth century BC.

In mythology, the Greek goddess Persephone was often identified as Kore to emphasise her innocence as a youthful maiden. This head may have been part of a votive statue to Persephone. It may be that the face resembles that of the donor. Alternatively, the kore head may have been dedicated at the theatre of Dionysos, during one of the many festivals held in Eleusis. Dedicating korai was a common practice in the sixth century BC. The connection between an individual and the gods was an intrinsic part of Greek life.

The front of the hair and headpiece of the reproduced cast has been finished in a light pink tint, which suggests the copyist aimed to create the appearance of ageing paint. The original head, however, only shows minor traces of red paint on some curls, indicating that the coloured finish was part of the reproduction process in the late 1980s.