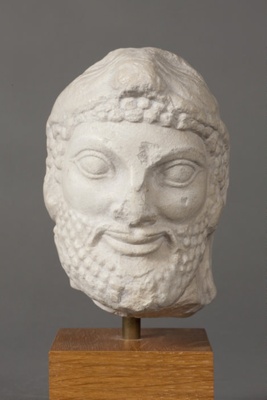 About this objectHerakles earned a number of distinguished titles in the ancient world: the unconquered, the lionhearted, the triumphal. He was even hailed as the ultimate protector of humankind. In myth, upon his death Herakles was welcomed into the realm of the Olympian gods, becoming a hero-god to be worshipped.

Many were eager to claim descent from Herakles, including Alexander the Great, who also wished to be looked upon as a hero-god. The Greek world took part in an annual festival held in his honour, and the city of Croton, a Greek colony in southern Italy, claimed Herakles as its founder, and minted his image on their coins.

The worship of Herakles spread throughout the Mediterranean. He was recognised as Hercle by the Etruscans and as Hercules by the Romans. His rise to divinity became especially important in Rome during the empire, when he served as a model for the deification of emperors.

The marble head of Herakles from which this cast was taken was probably part of a full-bodied figure dedicated in a sanctuary in the agora (public space) and may have been broken during the Persian sack of Athens in 480 BCE.