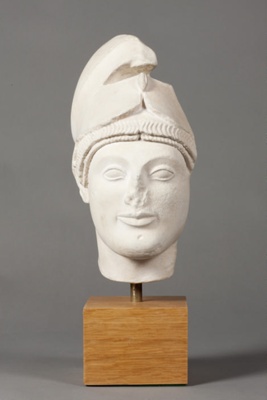 Name/TitleMarble head of a Warrior

About this objectThe original sculpture was part of the pedimental group of the temple of Aphaea on the island of Aegina, thought to represent Aeginetan soldiers in a battle. It is possible that the warrior represented a combatant in the first or second Trojan War.

The Greek historian Pausanias describes Aphaea as an epithet for the nymph Britomartis, the daughter of Zeus. According to the myth, she flung herself into a fisherman’s net whilst fleeing Minos, and Artemis took her to safety on the Aegean island. Aphaea is thought to mean ‘invisible’. Originally associated with fertility and agriculture, she was later connected with the goddess Athena as well.

The warrior’s approximate date of c. 500-490 BC coincides with the rebuilding of the temple of Aphaea after a fire thought to have occurred in c. 510 BC. Damage sustained by the original bust may correlate to this event.