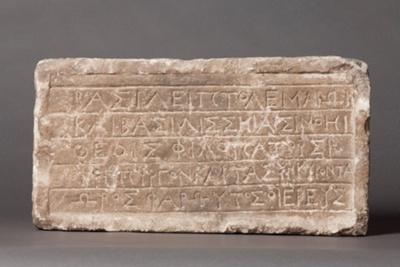 About this objectBelieved to be from Leontopolis (Tell el-Moqdam), in the Nile Delta, this inscription records a dedication to Ptolemy IV Philopator and Arsinoe III of some buildings, perhaps an agricultural complex on sacred land. The inscription reads:

To the King Ptolemy and Queen Arsinoe,
divine lovers of their father,
the building (pyrgos) and its appurtenances (ta sunkuronta)
(are dedicated by) Horus son of Pharous, the priest.

The inscription is cut on a roughly rectangular slab of limestone, although the block is not absolutely square. The stone is a fine cream-white that has since darkened on the exposed surface. The edges of the block have been left relatively rough and the piece must have been intended to be set into a wall or other feature. The lines of text are divided by horizontal grooves and, despite some irregularities, the letters tend to be centred on the spaces between them, although the fourth line is relatively cramped with the end of the last word being squeezed in.

This object is a good example of the mixing of Greek and Egyptian cultures by the end of the third century BC. The inscription is written in Greek, although the priest is almost certainly an Egyptian, and the king and queen are Greek, but have been given divine status as well as being brother and sister.

The inscription was first seen by scholars in 1960 in the hands of a dealer in the village of Hehia, northeast of Zagazig, and he maintained that it was from Leontopolis towards the head of the Nile delta.