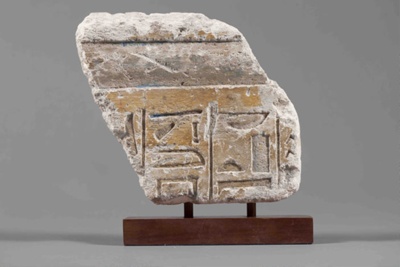 About this objectThis is a fragment of a limestone wall relief. It has been cut from a larger inscription and has become heavily chipped and scratched in places.
The fragment was coloured with yellow pigment on the inscription, and remains of a blue pigment can be seen in the band across the top. The inscribed area shows two full width columns of hieroglyphs, with the edges of two more columns visible on either side. The completed text would read:

[The living Aten, the Great One, Lord of the Sed-Festival, Lord of all that the Aten encircles] Lord of the Heavens, [Lord of the] Earth, whose temple is [in Akhetaten]

Aten (also known as Aton) was the disc of the sun in early Egyptian mythology, and was an aspect of the sun-god Ra. Akhenaten (who changed his name from Amenhotep IV) is known for abandoning the Egyptian tradition of worshiping many gods and introduced a monotheistic religion centred on Aten. He also moved the capital of Egypt from Thebes to his newly created city of Akhetaten ("Horizon of Aten"), now known as Amarna, or Tell el-Amarna. This is the only ancient Egyptian city that has preserved great details of its interior plan, as the city was abandoned after Akhenaten's death, when his son Tutankamun decided to return to Thebes.

Akhenaten's attempt to change the traditional religion was not widely accepted, and on his death most of his monuments were dismantled and hidden, his statues were destroyed and his name was taken off the list of kings, hiding him from history until the discovery of the site of Akhetaten in the 19th Century.

Inscription and Marks'[The living Aten, the Great One, Lord of the Sed-Festival, Lord of all that the Aten encircles] Lord of the Heavens, [Lord of the] Earth, whose temple is [in Akhetaten]'