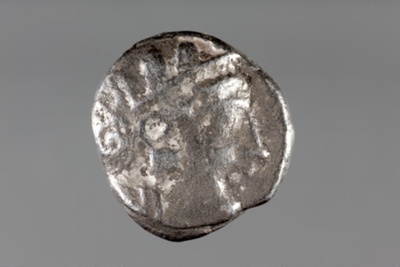 About this objectA tetradrachm was the equivalent of four drachma, which might have been worth three or four days' wages for a skilled worker in Athens in the third century BC. This tetradrachm weighs 17.1 grams, which was its standard weight in antiquity. It is approximately four times the weight of a standard drachma (4.3 grams).

On the obverse side of the coin is Athena, patron goddess of Athens. She wears a plumed helmet adorned with three olive leaves. The reverse side depicts an owl, which symbolised the wisdom of Athena. The inscription to the right of the owl, reading ΑΘΕ (athe), is an abbreviation meaning "of the Athenians".

The classical owl symbolised the wisdom of Athena and remained a consistent image on Athenian coins for around 500 years. For this reason, Athenian coins became known colloquially as "owls".

Inscription and MarksInscription on the reverse, ΑΘΕ (which is short for ΑΘΕΝΑΙΟΝ, "of the Athenians")