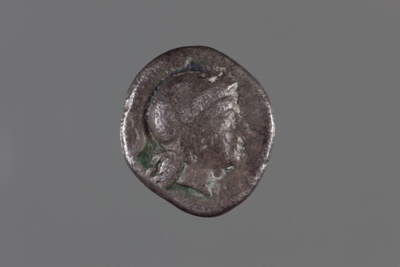 About this objectThis tetrobol was the equivalent of four obols in Ancient Greek currency. Its weight, 2.85 grams, corresponds to the weight of four obols (0.72 grams each).

In antiquity coins were valued by their weight. Evidence suggests that some of the earliest forms of currency around the ancient Mediterranean were weighted lots of metal. This became more sophisticated as smaller pieces of metal became standardised by their weight and were named as a particular measure, such as an obol or a drachm. These terms of measure became bywords for coins. The drachma was reintroduced as the standard Greek currency in the early nineteenth century AD and remained in use until 2002.

The tetrobol would have been worth two-thirds of a drachma in ancient times. Its physical size is smaller than a British penny. Although the coin is well worn, the helmeted head of Athena is clearly visible on the obverse side and two owls can be made out on the reverse. An “A” and “E” remain as part of the standard ΑΘΕ (athe) abbreviation inscribed on Athenian coins, meaning “of the Athenians”.

Inscription and MarksInscription on the reverse, Α[Θ]Ε (which is short for ΑΘΕΝΑΙΟΝ, "of the Athenians"). Theta (Θ) has worn off.