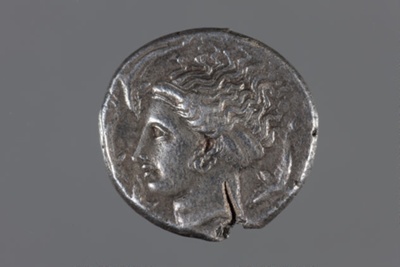 About this objectThis tetradrachm has a sophisticated design, representing a high point of Sicilian coin art in antiquity. The coin’s imagery celebrates the homeland and military victory of King Dionysius I of Syracuse. On the obverse side, the head of the nymph Arethusa is depicted with flowing hair as if underwater and surrounded by dolphins. In myth, Arethusa fled underwater from her home in Arcadia on the Greek mainland and resurfaced as a freshwater fountain on the island of Ortygia in Syracuse.

The reverse side depicts a quadriga (a four-horse chariot) and a charioteer about to be crowned by Nike, goddess of victory. The chariot race was a popular aristocratic sport at the ancient Olympic Games and an individual’s association with a chariot team would prove their wealth. Such imagery may therefore have been propaganda for Dionysius’ wealth and prestige. Dionysius was even said to have read his own poetry at the Olympic Games, although it was not received favourably by its audiences.

The dolphins that surround the imagery on both sides of the coin probably signify the importance of the sea to Syracusans and their identity as accomplished seafarers.