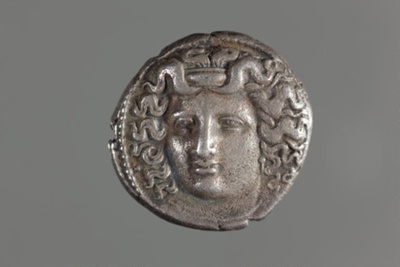 About this objectA drachma is generally thought to have been one day’s wage for a skilled worker in the fifth century BC.

On the obverse side of this drachma is the head of Larissa, a nymph who gave her name to Thessaly’s capital city. The city’s name goes as far back as Homer, who sang of the fertile land of Larissa in the Iliad. In myth, the nymph Larissa was a daughter of an Argive prince named Pelasgus. No remarkable significance about the story of Larissa survives, but many common Thessalian coins produced between 400 and 340 BC depict her on one side. The outward facing style is thought to have copied the way that the nymph Arethusa was often depicted on Syracusan coins. However, the example in the Logie Collection (see 202.06.1) shows Arethusa in profile.

The reverse side of the coin shows a horse grazing. Thessaly was famous for its horses and it may represent the fertility of its plains. The Greek warrior Achilles was said to have lived in Larissa with his father, Peleus. In the Iliad, Achilles’ horses were immortal and therefore unbeatable in battle. Note also the inscription, ΛΑΡ[ΙΣ] – ΑΙΩΝ (LARISAIŌN), above and below the grazing horse, meaning “of the Larissans”.