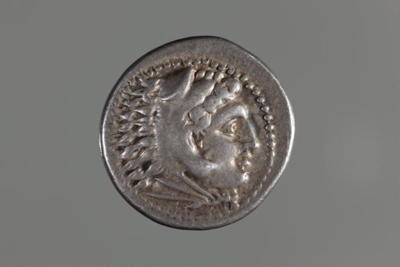 About this objectThis drachma was produced during the kingship of Alexander the Great, who ruled Macedonia and conquered much of the western world in the late fourth century BC. It was minted in Miletos, a Greek city on the western coast of Anatolia (modern-day Turkey). Miletos was liberated from Persian rule by Alexander in 334 BC. During Alexander’s rule, Miletos reached its greatest extent, occupying around 90 hectares of land within its walls.

The obverse side of this coin depicts the head of a beardless Heracles, identifiable by his lion skin headgear, which he acquired after defeating the Nemean Lion on his first of twelve labours. Heracles’ beardlessness signifies his youth, which may represent Alexander’s own youth. Alexander identified closely with Heracles, having been depicted often in sculpture and on coins wearing a lion skin. Alexander was even reputed to have named his second son Heracles. Associating oneself with Heracles suggested heroism, athleticism and military might. Other ancient figures were known to imitate Heracles as well with the lion skin and club costume, such as the Greek athlete Milo of Croton and the Roman emperor Commodus.

The reverse side of the coin depicts Zeus seated on a throne, holding an eagle in one hand and a sceptre in the other, possibly symbolising Alexander’s own supreme rule over his vast empire.

Richard Green notes in the Logie Collection Catalogue (p.298) that: "Alexander's coinage is the most prolific in the ancient world and was struck at mints throughout his empire, many of them posthumously. Price noted that this Milesian issue was an enormous one and considered the possibility of a need to make payments to returning veterans."

Inscription and MarksALEΞΑΝΔΡΟΥ (ALEXANDROU) and monogram on reverse side.