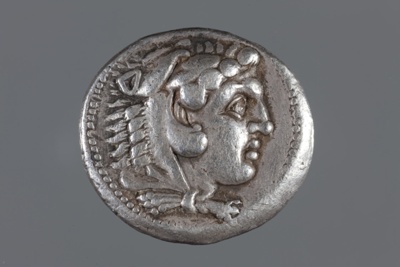 About this objectThis tetradrachm was minted in the Syrian city of Damascus, which Alexander the Great conquered in 333 BC during his military campaign in Asia. The city subsequently became Hellenised and remained as such for a thousand years until Christianity predominated in the fourth century AD.

The obverse side of the coin depicts a young, beardless Heracles wearing a lion skin. Heracles’ facial features are remarkably similar to those of Alexander, which suggest an assimilation of the two heroes’ identities. Like this youthful Heracles, Alexander achieved much from a young age, having ascended to the Macedonian throne by the age of 20 and conquering much of the western world by 30. The depiction of Heracles on Alexander coins may also reference the fact that Alexander’s ancestors on the side of his father, Phillip II, claimed descent from the mythical hero.

The reverse side of the coin depicts the Zeus, whom Alexander claimed at one time to be his real father, seated holding a sceptre and eagle – both symbols of Zeus’ supreme power. Note the half body of a ram underneath the eagle; this may represent the energy or sexual power that images of rams, bulls or lions tended to symbolise in art.