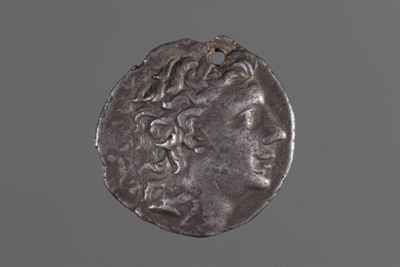 About this objectThis tetradrachm was produced in the latter years of the reign of King Mithridates VI of Pontus, who ruled over Asia Minor from 120-63 BC. The obverse side of this coin depicts the head of Mithridates with flowing hair, a portrait similar to those on coins depicting Alexander the Great. Mithridates was said to have admired Alexander and attempted to imitate him in physical appearance. A bust in the Louvre of Mithridates wearing a lion skin cap distinctly recalls Alexander’s heroic image and his own associations with Heracles.

Mithridates VI ascended the throne of Pontus after ousting his own mother, who had controversially taken power after the murder of Mithridates’ father, Mithridates V. Mithridates VI was said to have drunk different poisons in small portions in order to become immune, in case he became the target of a coup like that which dethroned his father. He went on to lead successful campaigns against Rome in what became known as the Mithridatic Wars. However, the Third Mithridatic War ended in victory for the Roman leader Pompey. Mithridates fled and eventually committed suicide.

The reverse side of this tetradrachm displays several elaborate symbols. The fruited ivy wreath surrounding the imagery signifies the god Dionysus, whose name Mithridates adopted as his own surname. The grazing stag at the centre may be the mint mark of Ephesos where the coin was likely produced. The sun and moon symbols, to the left of the stag, were a dynastic badge of the kings of Pontus.