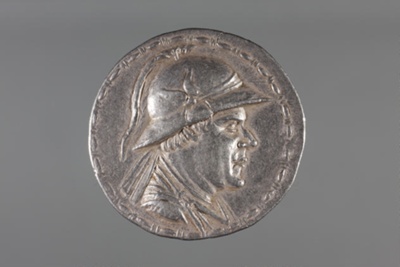 About this objectThe reverse of this tetradrachm clearly promotes military victory. Mythical brothers, Castor and Pollux, were esteemed horsemen; they took part in the Caledonian Boar hunt alongside heroes such as Heracles and they joined Jason’s famous Argo expedition. Here they are used as a motif probably to represent Eukratides’ military power and prestige.

Castor and Pollux were affable characters in Greek myth, which would have made them favourable heroes to be associated with. Pollux, fathered by the divine Zeus, opted to share his immortality with his mortal brother Castor, whose father was King Tyndareus of Sparta. Thus, Castor and Pollux shared their time between Mount Olympus, the home of the gods, and the Underworld, the land of the dead.

Eukratides himself was merely a Bactrian official when he was said to have raised a rebellion and overthrew King Antimachus of the Euthydemid dynasty. Eukratides then ruled for a quarter of a century before his son succeeded him upon his death. The vast and elaborate coinage that survives from Eukratides’ rule is evidence of his significant legacy. He was known as “Eukratides the Great”, as inscribed around Castor and Pollux on the reverse side of this coin (basileōs megalou Eukratidou, means “great king Eukratides”).

Eukratides ensured that his portrait on the obverse side of his coins resembled earlier Greco-Bactrian kings in order to suggest that he was one of them. He wears a crested helmet fitted with a bull's horn and ear, which was peculiar to Bactrian kings.

Inscription and MarksInscription on reverse side: ΒΑΣΙΛΕΩΣ ΜΕΓΑΛΟΥ ΕΥΚΡΑΤΙΔΟΥ ("Great King Eukratides") and a monogram appears beneath the horses' forelegs.