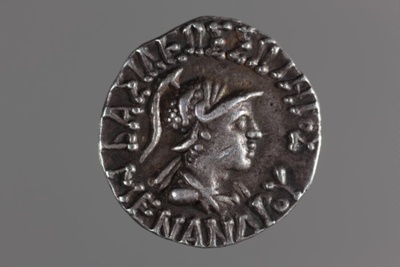 About this objectThis drachm, roughly worth a day’s wage for a skilled worker in the ancient Greek world, breaks tradition by presenting inscriptions on both sides of the coin. The inscriptions read “Saviour King Menander” on both sides: in Greek script on the obverse and Karosthi, an ancient Indian script, on the reverse.

King Menander I was born from descendants of Alexander the Great’s troops and ran a substantial empire across the Indian subcontinent. His epithet, Soter (meaning “saviour”), was a title that he adopted for himself during his reign. Accounts suggest that he was a favourable king, becoming a patron of Buddhism and handing over his kingdom to his son before his death. The Greek historian Plutarch notes that the city states under Menander’s rule agreed to divide his bodily remains among themselves and erect honorary monuments of him in their respective cities.

The obverse side features the bust of Menander, wearing a helmet, while the reverse shows a figure, Pallas, striding left in the role of 'promachos' ('front fighter'), wearing a helmet and an aegis, and holding a fulmen (lightning bolt).