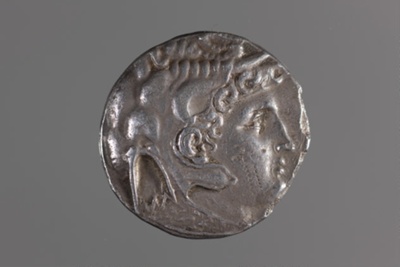 About this objectThis tetradrachm was produced during the reign of King Ptolemy I, a companion and historian of Alexander the Great, who became the ruler Egypt following Alexander’s death. With no prominent heir, Alexander’s empire was eventually divided up by regions, and so began the Ptolemaic dynasty of Egypt that lasted almost 300 years.

The coin depicts the head of Alexander wearing an Elephant scalp, which represents the conquering of India – his final conquest of eastern territory before turning back for Macedon. Alexander had previously been portrayed wearing a lionskin cap to associate him with Heracles (see, for example, 202.06.4 in the Logie Collection). Here the elephant scalp was a way of differentiating Alexander from Heracles, giving Alexander his own unique heroic identity. Later Greco-Bactrian kings Demetrius and Lysias portrayed themselves in the same way to celebrate their own Indian conquests and to draw connections between themselves and the legendary Alexander.

The reverse side of this coin shows the goddess Athena Promachos striding forth in battle. ‘Promachos’ means ‘first in battle’, a position that Alexander himself took when leading his army. Athena is also closely associated with her father Zeus, whom Alexander claimed to be the son of as well.

Inscription and MarksObverse side: Two mint marks appear on either side of Athena's legs and an inscription, reading ΑΛΕΞΑΝΔΡΟΥ ('ALEXANDER') appears down the left side.