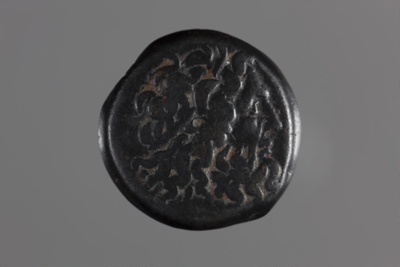 About this objectIn ancient currency a hemidrachm was a half-drachma, or the equivalent of three obols. Bronze metal was cheaper to produce than silver metal, and so silver-plated bronze coins began to emerge in the fifth century BC. This introduced the concept of token coinage since, unlike the intrinsic value of a silver coin, bronze coins were far cheaper than the amount of currency that they represented.

The imagery on this bronze coin is conventional; the obverse side depicts the bust of Zeus Ammon (the Egyptian name for Zeus) while his symbols, the eagle and lightning bolts, appear on the reverse. The inscription around the eagle reads Ptolemaiou Basileōs – “King Ptolemy”.

The coin was produced during the reign of Ptolemy VI Philometer, the sixth of 15 successive kings in the Ptolemaic Dynasty of Egypt. Ptolemy was only six years old when he became king, which meant that his mother, Cleopatra I, acted as co-regent of the kingdom on behalf of her son. In honour of their mother upon her death, Ptolemy and his sister Cleopatra II (whom he would later marry) were initiated into the cult of the Theoi Philometores (“the mother-loving gods”), which is where Ptolemy’s second name, Philometor, is derived from.