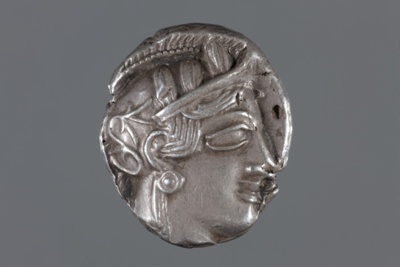 About this objectThis tetradrachm, worth the equivalent of four drachmas, can possibly be recognised as an Egyptian imitation of the standard Greek 'owl' coin. (See, for example, JLMC 181.97 for an authentic tetradrachm owl coin).

Like traditional owl coins, the reverse side shows an owl with the inscription “ATHE”, standing for “of the Athenians”, and the obverse side depicts the head of Athena, patron goddess of Athens. But slight differences in detailing around Athena’s eye and hair suggest that this might not be a genuine Athenian coin.

Athenian owl coins were accepted currency all around the ancient world. Many have been found around the Mediterranean from ancient times. However, when the Peloponnesian War – a brutal war between Athens and Sparta that lasted over 20 years – caused a shortage of Athenian coins, other major centres such as Egypt and Syria began to produce their own copies of Athenian owl coins. It appears that such copies were largely accepted around the Mediterranean and were probably circulated as far and wide as genuine owl coins.