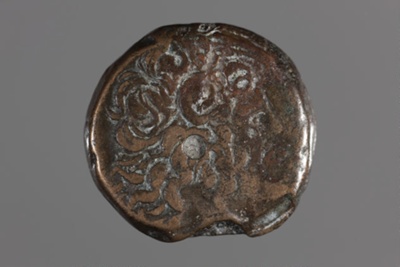 About this objectThis bronze drachm was produced around the middle the Ptolemaic dynasty, which lasted almost three hundred years. The Ptolemaic dynasty began when King Ptolemy I took control of Egypt after the death of Alexander the Great. Ptolemy had been a close companion and historian for Alexander and, upon Alexander’s death, his kingdom was divided up between many of his army generals.

This drachm carries conventional imagery for its time and place of production. The head of Zeus Ammon, the Egyptian name given to Zeus, appears on the obverse side. The reverse side depicts two eagles, which clearly symbolise Zeus’ divine power.

Unlike older silver coinage, this drachm is made predominantly from bronze metal. Just like the bronze hemidrachm in this collection (JLMC 180.96.9), this drachm would merely have been silver-plated over its bronze core. This made the coin significantly cheaper to produce, since bronze was a cheaper metal than silver.