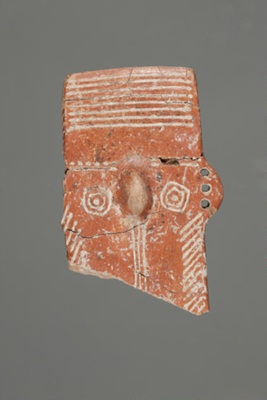 About this objectThis head of a plank idol was found in the chamber of a tomb in Palealona, on the north coast of Cyprus. It dates to around the 20th Century BC, the transition between the Early Cypriot and the Middle Cypriot period.

The idol has been repaired from two fragments of a slab of orange-buff clay, and is missing the right ear. A pinch of clay has been added to form the nose, and the end has worn. The surface of the idol is covered with a red slip, and the decorative incisions are filled with white. The eyes are represented by concentric circles, below horizontal lines of dots for the eyebrows. Below the nose three vertical lines stretch down, with some scholars thinking they represent the philtrum or possibly a nose pendant. Hair is shown on the front by eight horizontal lines across the top of the head and short diagonal lines on the sides of the face from the ears to the broken section where the shoulders would have been. On the back hair is shown by two overlapping zigzags of five lines each, creating a diamond pattern.

The remaining ear is attached to the side of the head as a semi-circular pinch of clay approximately halfway down the head and in line with the eyes and nose. Three holes in the ear are thought to have been filled with earrings. The use of earrings, along with other incised decoration on plank idols, suggests that they were representations of a major female deity, possibly the fertility goddess Inanna-Ishtar, a Bronze Age Near Eastern precursor of Aphrodite. It may be that the figure is a psychopompos, who escorted the souls of the deceased to the Underworld where they were reborn into another life.

Place NotesExcavated from Karmi - Palealona tomb 8. Found in the chamber of the tomb