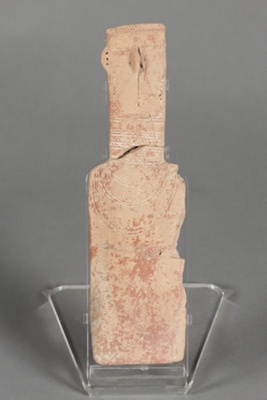 About this objectPlank idols are made from a flat slab of clay cut out to create two rectangles joined together. The upper rectangle is small and represents the head and neck, and the lower, larger rectangle represents the body. The ears and nose have been added as extra pinches of clay.

This piece is repaired from three large fragments; some small chips and the left ear are missing. The pale orange-brown clay was covered in a red-brown slip, and the decorative incisions have been filled with white. There are three holes in the preserved ear, for earrings. On the front, the eyes are shown as impressed dot-rosettes to either side of the nose. There are incised oblique lines at the side of the head to suggest hair. Above the nose, incised lines with dots above represent the eyebrows. An added band of clay at the top, with small incisions, appears to represent a head band holding back hair. Horizontal lines on the neck and looping incisions on the chest suggest chokers and necklaces as decoration. On the back, hair is shown as two sets of double zigzags from the top of the head to the base of the neck. Groups of short horizontal lines arranged in three vertical rows run from each shoulder to the waist.

This plank idol was found in the entrance of a tomb in Palealona on the north coast of Crete, along with another plank idol head fragment. The idols are thought to represent a major female deity, such as Inanna-Ishtar, the Bronze Age precursor of Aphrodite, who symbolised fertility and rebirth. She may have acted as a psychopompous, guiding the souls of the dead to their rebirth in the afterlife.

Place NotesExcavated from Karmi - Palealona tomb 8. Found in the dromos.