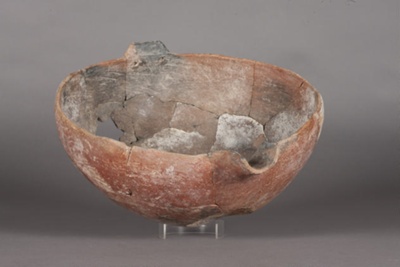 About this objectThis large Bronze Age spouted bowl was found in a pit-tomb near Nicosia in Crete. Made of orange-brown clay, the handmade bowl is covered in a red slip with some black patches.

The bowl is almost twice the size of most of the other knob lug bowls in the collection, and is the only one to include a spout. The lug is also formed differently to the rest, rising up from the lip rather than sticking out perpendicular to the rim, and it has been pierced twice to create two holes for use in hanging it.

The addition of spouts is likely to have come from the influence of Anatolian pottery styles as there is evidence that the region (also known as Asia Minor, now much of Asian Turkey) was interacting with Cyprus in the Early Cypriote period (around 2300-1900 BC). Spouted vessels from Minoan Crete in this period may also have had some influence. In later periods, large spouted bowls were included in elaborate 'drinking sets' along with kraters, jugs and tankards. Found in some 16th-14th Century BC Cypriot burials, the sets were used for feasting and celebration, and also became seen as a mark of elite distinction, particularly later sets that showed a Mycenaean style or influence.