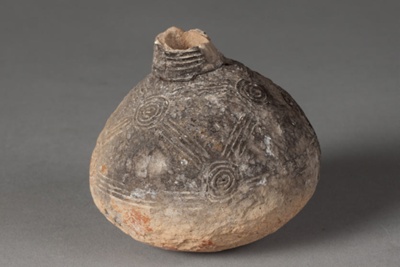 About this objectThis round-bodied flask has been repaired from several fragments. Possibly broken while it was in the grave, the flask found in a Bronze Age pit-tomb near Nicosia in Cyprus. Small flasks like this are often associated with perfumes and other scented oils.

The surface of this flask was covered in a red slip that has fired black over the top section. Concentric circles have been incised in two levels around the body, and are connected by groups of four lines, both horizontally and diagonally. This pattern is sometimes referred to as a 'sling-net' pattern, and it is thought to be a stylised representation of the nets used to carry similar bottles and flasks. The lines show the string being joined by the circles, which represent knots. Concentric circles are also a common decorative element in Cypriot pottery.