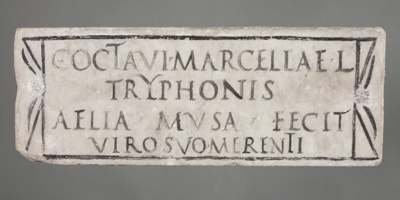 About this objectLoving duty and respect for the ancestors was a fundamental part of Roman culture. Commemoration of the dead is an important aspect of this, and this is demonstrated very well by this Roman grave marker or funerary inscription stone.

Cremation was the most common burial practice in the mid- to late Republic and the Empire into the 1st and 2nd centuries CE. Families bought plots of land along the roads leading to cities where they placed tomb inscriptions, or they left the remains of their deceased members in catacombs or in a necropolis or columbarium. A columbarium is a place for the respectful and usually public storage of cinerary urns (holding cremated remains), and inscribed slabs like this one would be used to cover the niche and protect the urn inside.

This slab is of a fine-grained white marble with some pale grey streaks.
The inscription is outlined as a 'tabula ansata', a tablet with dovetail handles. Small ivy leaves are used as word dividers since Latin writing tended to run continuously (scriptio continua) until around the 10th Century CE. The black in-painting that makes the letters stand out is a more modern addition. The peg-holes to either side have been filled with mortar.

The inscription translates as:
[The tomb of] Gaius Octavius Tryphon,
freedman of Marcella. Aelia Musa set it
up for her deserving husband.

The Marcella mentioned may have been Marcella minor, the younger daughter of Emperor Augustus’ sister Octavia and C. Claudius Marcellus, who was consul in 50 BCE. The columbarium of her and her first husband's freedmen and slaves seems to have contained no inscriptions earlier than 10 CE, and seems to have been in greatest use in late Augustan and early Tiberian times. Although there is no firm evidence that she is the Marcella referred to, her freedman (former slave) may well have taken the name Gaius Octavius in tribute to her illustrious uncle. We might also suspect that his wife Aelia Musa was a freedwoman of a distinguished family.

[The tomb of] Gaius Octavius Tryphon,
freedman of Marcella. Aelia Musa set it
up for her deserving husband.

Subject and Association KeywordsDeath in art