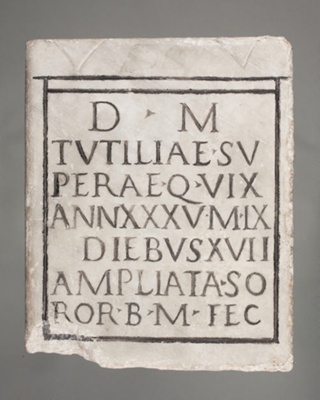 About this objectReligious obligations permeated all levels of Roman society, and offerings and dedications continued to be performed for a family member after death. Grave markers or funerary inscriptions such as this one publicly demonstrated that the family of the deceased were attending to their obligations.

Families could buy plots of land along the roads leading to cities where they placed the tomb inscriptions, or they left the remains of their deceased members in catacombs or in a necropolis or columbarium. A columbarium is a place for the storage of cinerary urns (holding cremated remains), and inscribed slabs like this would be used to cover the niche and protect the urn inside. Traces of mortar around all four edges suggest this may have been how this object was used.

Made of a fine-grained white marble with some pale grey streaks, this slab has come from a larger piece. The left edge is rounded and smoothed, but the other three sides have been roughly chiselled. Two v-shaped elements above the inscription are likely remnants of the decoration from its earlier use. In contrast, the black in-painting of the letters has been added in more recent times.

This marble funerary tablet inscribed in Latin was dedicated by a woman named Ampliata, who erected it on the death of her ‘well deserving sister’ Tutillia Supera, who lived for thirty-five years, nine months and seventeen days. As many in the ancient world were illiterate, Roman tombstones were inscribed with simple and formulaic texts. The ‘D·M’ on the tablet is an abbreviation of Dis Manibus, which means ‘to the spirits of the departed’. It alerts those who have gone before that another spirit is on the way and is commended to their care. Miniature ivy leaves as word dividers, as until the 10th Century CE Latin was written without spacing, in a style called scriptio continua.

Subject and Association KeywordsDeath in art