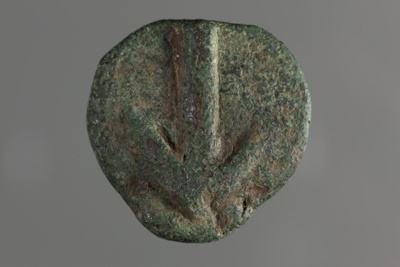 About this objectAes grave, meaning heavy bronze, is the term used for bronze cast coins used in central Italy during the 3rd Century BC. These coins are among the heaviest specimens known of that time. Their value is indicated by signs on the coin: I indicates an as, S for Semi (half an as), and pellets for the smaller denominations. One pellet indicates an uncia, worth one twelfth of an as.

The reverse of this coin has the letters HAT around the single pellet of an uncia. HAT indicates the origin is Hatria, now modern Atri, on the north-eastern coast of Italy. Ancient Hatria was a place of considerable importance in the province of Picenum. Hatria Picena is first mentioned as becoming established as a Roman colony in about 282 BC. Although the town itself is on a hill a short distance from the coast, it had a major port at the mouth of the Matrinus River. This, along with its position at the junction of some major Roman roads, would have contributed to its importance. It is also the origin of the family of the emperor Hadrian, and the place that he took his name from.

The obverse of this coin shows a thick anchor, a common symbol on Hatrian coins. They often have a nautical theme, showing fishes, anchors and other maritime symbols along with the legend HAT. The coin itself is worn, especially around the circumference, and is somewhat lighter than the average weight. This may be due to excessive wear or shaving the edges. The surface is covered in a green patina common on bronze and copper objects. It has been cast, or shaped by a mold, rather than being struck with a die.