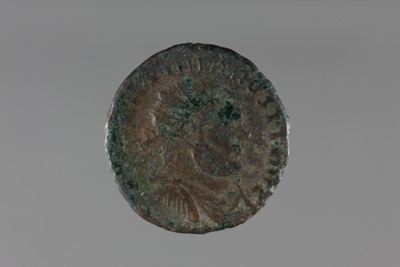 About this objectMarcus Aurelius Valerius Maximianus Herculius, known as Maximian, was Roman emperor from 286-310 CE, (and again from 306-308 CE) as part of the first Tetrarchy of Rome. He was made Caesar (sub-emperor) by Diocletian in 285 CE and elevated to co-Augustus in 286.

Succession in the third century had become troublesome, with any successful general able to attempt a claim to the throne, and the empire was becoming harder to unify. Diocletian recognised this, and his attempt to reconcile the government of Rome he developed the Tetrarchy. His first step was to create a co-Augustus, elevating Maximian from his rank as Caesar. Rome now had two emperors, allowing Diocletian to control the eastern regions of the empire, while Maximian took charge of the western regions. In 293, Diocletian and Maximian agreed on a future-proofing system, each choosing a caesar to eventually replace them. The augusti would serve for their term, and on their retirement, the caesars would replace them as augusti, and appoint new caesares.

This coin displays Maximian's pledge to serve for twenty years, his votis vicennabilis. The obverse side shows a bust of Maximian, wearing a radiate crown. Radiate or radiant crowns had points like rays of the sun, and were associated with Sol, the sun god. Radiate crowns were also used on coinage to distinguish between different denominations. For example, brass and copper coins were easy to distinguish when new, but would both develop a brown patina over time.

[FK may stand for Fortunate Carthage, however it also appears on other coins as the mint mark indicating Carthage]