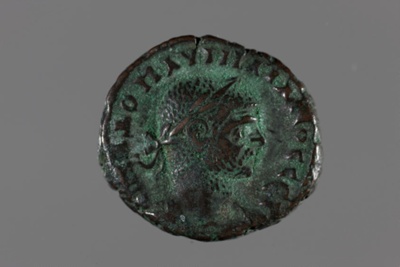 About this objectUnder the Ptolemies, Egypt had used its own monetary system that was not freely convertible to Greek or Roman standards. Under the Roman Empire, the Ptolemaic silver tetradrachm was continued, but it became debased with a much lower silver content to equate them to the Roman denarius. Billon coins, an alloy of mostly base metal with silver (or other precious metal) were common at this time.

This tetradrachm from Alexandria shows a bust of the emperor Aurelian wearing a laurel wreath and breastplate. The inscription identifies him and his titles as Autokrator (Emperor) Caesar Lucius Domitius Aurelian Augustus, and on the reverse it is dated with the 5th year of his reign in the Alexandrian calendar, which identifies it as made in 273 or 274 CE.

The reverse shows an eagle with its wings spread open, standing on a fulmen (lightning bolt) with a wreath in its beak and a star above its right wing. Both sides have a dotted border. It was becoming increasingly common for emperors to be shown in military attire during this period, and the eagle standard reinforces the importance of the army to the emperors rule.

Aurelian was known for strengthening and reuniting the Empire, but also for his coinage reform. When he came to power in 270 CE, Roman coinage had been debased so far that some of the so-called silver coins had almost no silver content at all. Aurelian standardised the alloy at one part silver to 20 parts copper. The coins still needed a silver wash to appear silver, but the alloy standardisation returned confidence to the Roman monetary values.

Subject and Association KeywordsBirds in art