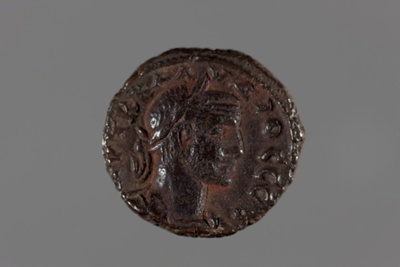 About this objectMarcus Aurelius Claudius, also known as Claudius II or Claudius Gothicus, was Roman emperor from 268-270 CE. He was the first of the 'soldier emperors' of the Third Century, earning the name Gothicus for his decisive defeat of the Goths at the Battle of Naissus. He was also awarded the title of "Germanicus Maximus" for his quick and successful response against the Alamanni at the Battle of Lake Benacus.

The obverse of this tetradrachm shows a bust of the bearded emperor in his military armour, wearing a laurel wreath. It dates from the second year of his reign in the Alexandrian calendar, around 269 or 270 CE.

The reverse image is a common one for Alexandrian coins. It shows Dikaiosyne, the personification of righteousness and justice. She is in a standard pose, seated with a cornucopia resting on her left arm and scales hanging from her right arm. The Roman equivalent of the Greek Dikaiosyne was Aequitas, the personification of equity or fair dealing. Aequitas is also often seen holding scales and cornucopiae, and occasionally holding a sceptre.