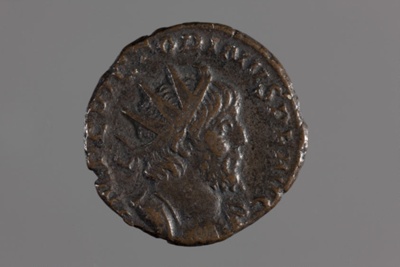 About this objectThis coin features a bust of Marcus Piavonius (or Piaonius) Victorinus, who was emperor of the breakaway Gallic Empire from 269-271 CE. Victorinus had been a soldier, who was elevated to co-Consul in 268 CE. Victorinus ruled for around two years before being murdered by his own officers, who were upset by his relentless pursuit of married women (including their own wives).

The bust of Victorinus on the obverse of this coin shows him in cuirass and radiate crown. On the reverse is an image of Salus feeding a serpent, with the inscription SALVS AVG. Salus was a Roman goddess or personification of well-being and social welfare, identified and worshipped as Hygieia by the Greeks, and as Ðirona (Sirona, Thirona) by the Gauls. To the Romans, the serpent is also a sign of health-restoring faculty and renovation, because the serpent would cast off its old skin to become young again. In the same way, it was believed that the sick, through the help of healing deities, could renew life and put off old age. It has been suggested that the mention of the deities of health on an emperor's coin indicated that the ruler was afflicted by some disease.

An antoninianus was a Roman coin thought to be valued at around two denarii.

Subject and Association KeywordsMedicine and Art