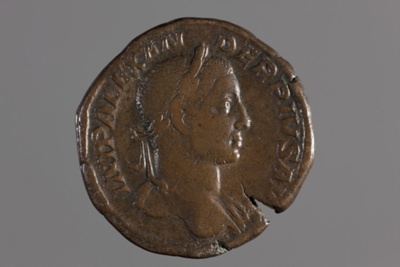 About this objectThis Roman coin was issued during the rule of Alexander Severus, also known as Severus Alexander, who was emperor of Rome from 222-235 CE. He was born in Phoenicia in 209 CE and given the birth name Gessius Bassianus Alexianus. His cousin Elagabalus (emperor from 218-222 CE) was persuaded to adopt him as son and heir. Alexianus quickly became more popular than his cousin, who attempted to have him assassinated. This led to the praetorian guard killing Elagabalus, and Alexianus ascended the throne, taking the name Marcus Aurelius Severus Alexander. At around 14 years old, he became the youngest sole legal Roman Emperor of the united empire, until the reign of Gordian III in 238 CE.

The bust of Alexander Severus on this sestertius shows him wearing a laurel wreath, a symbol of victory and honour. On the reverse the personification of Victory is shown standing and holding a wreath and a palm leaf. As with many coins in the later Empire, military symbolism and success were important themes to convey to the people about their emperor.

The inscription around the figure tells us that the coin was made in 231 CE, when Alexander was consul for the third time and in his tenth year holding Tribunicia Potestas, the power of veto in legislation. There is a significant radial crack on the edge of the coin, caused by the stress on the metal during the striking process. Less malleable metals are more likely to crack when struck, unlike gold which is softer.