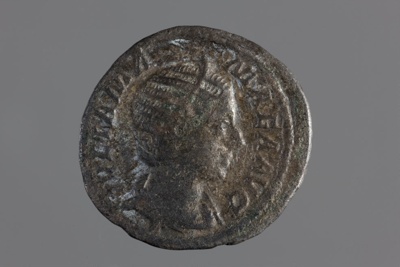 About this objectJulia Avita Mamaea was the daughter of Julia Maesa and mother of Alexander Severus. She and her mother convinced the emperor Elagabalus (her nephew) to adopt Alexander Severus as his heir and make him Caesar. When 14-year-old Alexander became emperor in 222 CE, Julia Mamaea and her mother were named his regents, and Mamaea gained the title Augusta (empress). The two women controlled the young, weak ruler, holding the true power behind the throne. On her mother’s death, Julia Mamaea continued to exert her influence in the running of the Empire. At first she ruled effectively, and received the title 'consors imperii' (partner in rule, or imperial consort) which made her the first officially recognised empress of the Roman Empire.

Dating to 222 CE, this silver denarius shows a bust of Julia Mamaea with the title Augusta on the obverse. The waves of her hairstyle are still visible along with the diadem she wears. On the reverse is a full figure of Felicitas, in the role of Felicitas Publica, the personification of good fortune and happiness for the public. She stands, leaning casually on a column with her legs crossed, and holding a caduceus in her right hand. The caduceus, a staff with two snakes entwined around it, is a symbol of health. Felicitas is also often seen holding a cornucopia (horn of plenty), a symbol of abundance, representing the fortune and prosperity she could bestow.