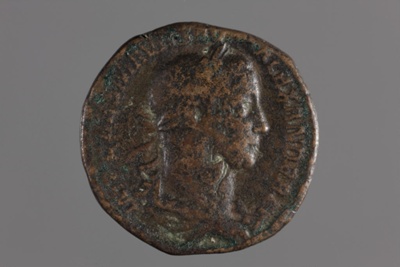 About this objectBronze sestertius issued during the reign of Alexander Severus (AD 222-235). Mint unknown, AD 227. The obverse features a draped bust of the emperor in a dotted border.

Alexander Severus, also known as Severus Alexander, was emperor of Rome from 222-235 CE. He was born in Phoenicia in 209 CE and given the birth name Gessius Bassianus Alexianus. His cousin Elagabalus (emperor from 218-222 CE) was persuaded to adopt him as son and heir by their grandmother Julia Maesa in 221 CE.

Alexianus quickly became more popular than his cousin, who attempted to have him assassinated. This led to the praetorian guard killing Elagabalus, and Alexianus ascended the throne, taking the name Marcus Aurelius Severus Alexander to emphasise his Severan family links.

Alexander Severus was a patron of literature, and encouraged learning and education, dedicating his hours of relaxation to studying historians, orators, and poets. He would attend the public schools to listen to the speeches of his subjects. During his reign, many stately buildings and porticoes were built in Rome, and he kept the provinces well supplied.

Fittingly, the reverse of this sestertius shows Pax, the Roman goddess of peace, with a branch raised in her right hand and a sceptre in her left. The titles listed around the figure allow us to work out the date the coin was minted, 227 CE.