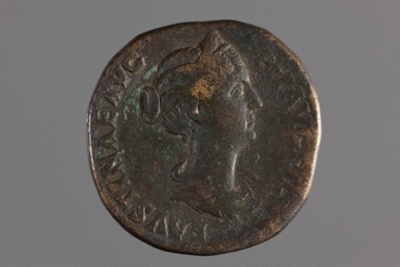 About this objectAnnia Galeria Faustina Minor (known as Faustina Minor, Faustina the Younger, or Faustina II) was the daughter of Antoninus Pius and his wife Faustina the Elder. Born around 130 CE, she was their fourth and youngest child, and the only one to reach adulthood. Her father organised a marriage between her and his adoptive son Marcus Aurelius, who became co-ruler with Lucius Verus on Antoninus' death in 161 CE. Faustina travelled extensively with Marcus Aurelius on his campaigns and earned the title 'Mater Castrorum' (Mother of the Camp), in addition to her title Augusta received in 147 CE.

This bronze sestertius shows a bust of Faustina Minor wearing a diadem and appearing as a younger woman than on other examples in the Logie Collection. On the obverse is the full figure of Venus, goddess of love, holding an apple and carrying a swaddled child. This coin type refers to the birth of Titus Aelius Antoninus, Faustina's fourth child, who died in infancy. Faustina and Marcus Aurelius had fourteen children, but only six lived beyond childhood.