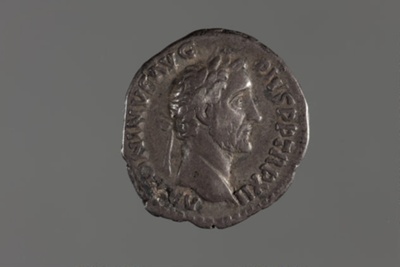 About this objectA silver denarius minted for Antoninus Pius (AD 138-161).

Antoninus Pius was born in 86 CE, with the full name Titus Aurelius Fulvius Boionius Arrius Antoninus. Born into a senatorial family, he held several offices, and was appointed proconsul of Italia by Hadrian. Antoninus’ reputation grew, and when Hadrian’s previous heirs died before him, Hadrian chose him to become his adopted son and heir to the Empire. Hadrian’s intent was that the elder Antoninus be a caretaker Emperor, while his ideal successor Marcus Aurelius (only 16 at the time) came of age.

Adopted on 25 February 138 CE, aged 51, Antoninus became emperor on 10 July of the same year, when Hadrian’s ill health overtook him. Antoninus took the regnal name Imperator Caesar Titus Aelius Hadrianus Antoninus Augustus, in honour of his adopted father. He was granted the title ‘Pius’ (dutiful in affection) by the Senate, for his request to grant divine honours to Hadrian, or possibly for his mercy in freeing several senators that Hadrian had decreed to die.

Instead of only being a stand-in for the next ruler, Antoninus Pius lived much longer than expected, and was a capable and conscientious emperor. He was the fourth of the “five good emperors” and his reign was marked by peace and stability. Temples, theatres and mausoleums were built, free access to drinking water was expanded throughout the empire, and a successful campaign in Scotland resulted in the construction of the Antonine Wall. He died in 161 CE, aged 74, and was succeeded by Marcus Aurelius and Lucius Verus.

As Antoninus was emperor later in life, his portraits represent him as a mature man in a style that echoes the sober, refined imperialism of Hadrian. Dating to the middle of his reign, the bust on this coin shows Antoninus Pius with a beard, wearing the laurel wreath. He was the second of the bearded emperors, following Hadrian.

On the reverse is an image of Salus using a patera (shallow, round dish) to feed a snake that is coiled around a circular altar. Her left hand is holding a rudder attached to a globe. Salus (Health) was a Roman goddess or personification of well-being and social welfare, identified and worshipped as Hygieia by the Greeks, and as Ðirona (Sirona, Thirona) by the Gauls. She is often depicted with a sacred snake, also a symbol of health and rejuvenation. The patera was a shallow, round dish used to sacrifice grain to the gods in religious ceremonies. This part of the image indicates a pius and conscientious emperor, aware of his duties to the gods. The rudder and globe are a symbol of government, with the globe representing the earth and the rudder representing the sea. The two combined depict the extending authority of Rome across these dominions. It is very similar to the earlier imagery of Fortuna on a bronze as (JLMC180.96.24). For a later depiction of Salus, see JLMC180.96.32, a billon Antoninus from the reign of Victorinus of the Gallic Empire.

Reverse:
COS IIII
(Consul IIII)
Consul for the 4th time