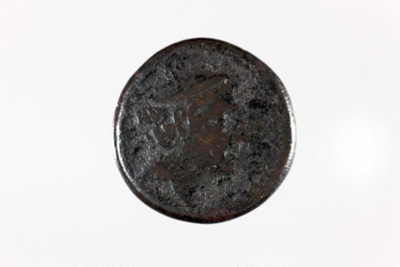 About this objectThis Semuncia is a Roman Republican coin of very low value, roughly the equivalent of one twenty fourth of an As of the time. The difference in value is reflected in their weights – the As weighed on average 132g, while this lowly coin weighs only 5.2g. Made of bronze, the coin has been made by striking it between two metal dies.

Mercury (Roman equivalent to the god Hermes) appears on several Republican coins, usually showing just his head, wearing a traveller's broad-brimmed sun-hat with wings emerging from it (as is seen on obverse of the coin). These wings symbolise his speed, and were a way of making it clear which deity was being depicted. Mercury, the messenger god, was well loved by the Romans for his control over travel and commerce. He also guided the souls of the deceased to the underworld.

On the reverse of this coin is a ship's prow with the inscription 'Roma' in the field above it. Victorious generals would often stand in the prow of a defeated enemy's ship to give speeches, making it a symbol of triumph.

Inscription and MarksReverse; ROMA, in field above main panel.