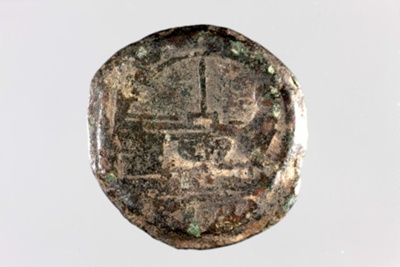 About this objectThis lower value Roman coin was called an As. The coin features the god Janus. The double-headed Janus was one of the few Roman deities that had no Greek counterpart. He was the god of change, new beginnings, passages, doorways and gateways. January is the month of new beginnings and so is named after the double-headed god.

Janus was worshipped at the beginnings of the harvest, marriages, and deaths. The god represented the meeting ground between barbarism and civilization, rural areas and cities, youth and adulthood.

Though this coin is worn it is just possible to see the bearded double heads of Janus on the obverse. Janus is often shown with two or four heads and with or without beards. This is due to his nature being the gateway between youth and adulthood.

On the reverse the coin depicts a prow of a ship, the prows of captured enemy ships were often the place for senators or victorious generals to give speeches to troops or citizens.