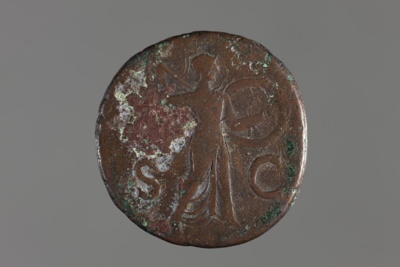 About this objectThis type of coin was one of the higher denominations of Roman Bronze coins, most other Roman coins were based on the weight of the as. The division of the as produces the quadrans (worth a quarter of an as), the sextans (worth one sixth of an as), and semiuncia (one twenty fourth of an as) , as well as multiples of value and weight; the dupondius (twice the value), sestertius (two and a half times the value), and tressis (three times the value).

On the reverse of this coin is an image of Minerva draped and wearing a crested helmet and an aegis with a fringe of snakes, holding a raised spear in her right hand and a shield on her left arm. Minerva is often thought to be the Roman equivalent of the Greek goddess Athena, who featured heavily on Greek coins, especially those of Athens and Aegina. Minerva also had origins in the Etruscan goddess Menrva. All three of these goddesses are deities of war, art, wisdom, and medicine.

The obverse of the coin features a bust of the emperor Claudius, who became emperor after a coup by the Praetorian guards. The guards killed Claudius’ nephew Caligula but left Claudius as they did not see him as a threat with his limp and slight deafness. He proved to be a capable and efficient administrator. He expanded imperial bureaucracy to include freedmen, and helped to restore the empire's finances after the lavishness of Caligula's reign. Claudius also had constructed new roads, aqueducts, and canals across the Empire. He is thought to have been assassinated by his wife Agrippina at the age of 63.