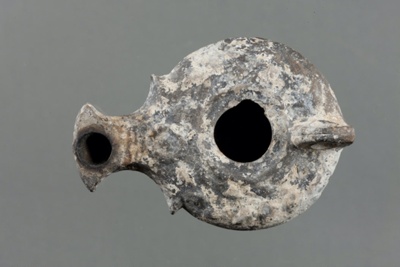 About this objectThis clay lamp has been made of a light blue-grey clay and covered with a dark, matt blue-grey slip. Although the surface is encrusted, we are still able to see the worn wreath decoration, and it appears the lamp was produced in a well-worn mould. It has a spatulate (splayed wide) nozzle with pointed ornaments joining it to the shoulder. Blackening around the wick hole show evidence of its use.

Contemporary with JLMC 195.04, this is a less common type of lamp found only in a few sites in Israel and probably also manufactured in the workshops of Jerusalem. It dates from the middle of the first century AD to the destruction of Jerusalem in AD 70.

Although similar in shape, such lamps have certain recognisable characteristics that differentiate them from the Herodian lamps of the end of the first century BCE and start of the first century CE. These include low ring bases, vertical ring handles and a fine grey fabric, with black slip. Most importantly, instead of being fashioned on the wheel, they were mould-made, a technique that allowed for the incorporation of relief decoration on the shoulder. Motifs were usually floral in nature and included olive and myrtle twigs, oak leaves and acorns, capers, ivy, and acanthus leaves, all of which were common to Judaea at the time.

Although this example is incrusted, it is still possible to discern a wreath on the shoulder and a smaller wreath on the nozzle. The use of wreaths was common in funeral settings and, as well as being used on lamps, is found on sarcophagi, ossuaries and tomb friezes in Judaea of the same period. It is possible that this example was once recovered from a tomb.

Place NotesJudaea, probably manufactured in the workshops of Jerusalem