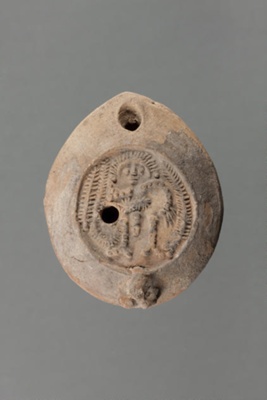 About this objectThis lamp is currently the earliest Byzantine lamp in the Logie Collection. Its light reddish brown clay is typical of regions within Lower Egypt, most notably Abu Mena. The common characteristics of lamps of this shape include a pointed piriform (pear-shaped) oil chamber, a sunken circular discus on top decorated in high relief, a vertical loop or knob handle, and a pointed ring base, often decorated with cross motifs in relief. Unusually, the handle of this lamp is made up of a cluster of three small spheres or lugs.

The most distinguishing characteristic of this lamp is the relief decoration, which shows a stylised figure surrounded by palm fronds, apparently holding one frond over his head. The decoration is arranged so that its base of the image is to the handle (rather than the opposite way, which is more normal). The limbs of the figure are depicted by rows of dots and the fingers of the left hand are shown as lines, resembling the bones of a skeleton. The hair appears to be standing up, although these lines may be a radiate nimbus or crown. The scene has been interpreted as a charioteer with a palm frond as a symbol of victory. The cross motif on the underside is testimony to the conversion of a large part of Egypt to the Christian faith by the Byzantine period.

This lamp belongs to a small series of Egyptian lamps of the same shape and fabric. Many of them bear figures of the so-called charioteer holding palm fronds, while others depict scenes of a religious nature such as saints, bishops, or figures from the Bible.