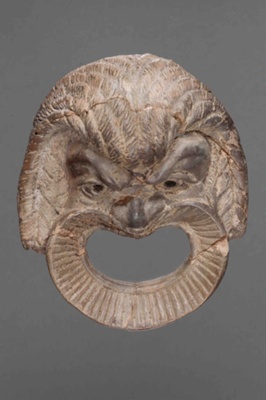 About this objectThis is a terracotta comic mask of a male slave. The mask has two small round eyeholes and a large, upturned mouth hole. The character has long, thick curls, a ‘snub’ nose, a striated beard surrounding the mouth hole, and large dramatic eyebrows.

The mask appears to have a whitewash slip overtop which defines the features. Otherwise, the media is a dark green/brown colour. The inside of the mask is very neat and uniform which suggests it may have been mould-made. The mask also has a small suspension hole at the very top of the head.

In ancient Greek theatre, the comic slave character is easily identified by the protruding forehead and trumpet shaped mouth. This character was a common stock character in Greek comedies. Theatre masks allowed actors to anonymously assume a role and stand out on stage to thousands of viewers. The exaggeration of their faces allowed audiences to follow storylines easier and identify the characters.

There is a slight mystery with this object. When it was first donated, it was presumed to be ancient, dating to around the 3rd century BCE. Further examination has suggested that it may have been made far more recently, and perhaps be a 19th century imitation of the type made for sale to tourists in Greece. Further investigation is required to establish its correct age.

Even if the mask is ancient, it would not have been intended as an actual costume piece, but would have been an artistic interpretation of what true theatre masks looked like. In ancient times, copies of masks like this may have been meant to be a form of household decoration, a votive offering to Dionysos, or a funerary offering for an actor.

Place NotesFound by the Grandfather of a friend of Eleanor M. Grantham, in Greece. Refer to E.M Grantham letter, 04/12/1970: “It was willed to me by a friend whose grandfather had procured it on one of his tours in Greece, c. 1860. From my memory of some watercolours Mr Newman did on the tour, he visited Mycenae, Athens and Cnossos in Crete. Mr Newman was told that the mask in the grave indicated that it was that of an actor in the tragic vein. I assume that it was reassembled in Greece”