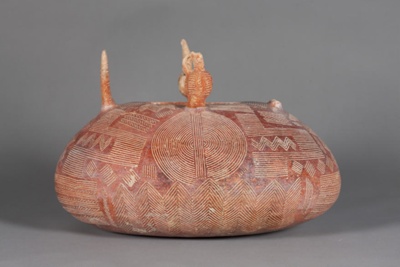 About this objectCypriot Bronze Age Pyxis with lid.
A pyxis was designed to hold cosmetics and other items of adornment such as jewellery and clothing accessories.
Excavated from a Bronze Age tomb on the island of Cyprus, this pyxis is an extremely special find for a number of reasons. This egg-shaped Pyxis type is relatively rare. The shape is quite specific in date and is not found in any other period. The decorative figures on the top of the vessel are in a fairly unique position. And also, it is a very rare object, because archaeologists don’t often find vessels that still have their lids.
The pyxis was found nearly intact, with one of the figures missing and one of the juglets detached but recovered. The handle of the lid was unfortunately struck off and lost during clearance of the chamber. It is made of pale brown clay covered on the outer faces with a red-brown slip that is somewhat lustrous in places. The main body of the vessel is the rare egg shape, with a curved rectangular access hole in the top covered by the lid. Both the lid and the sides of the hole have matching double-pierced sections for tying together.
The whole of the visible surface (but not the underside) is covered with incised decoration typical of the Early Cypriote period (2300-1900 BC). Each of the long sides is dominated by a large concentric circle, divided in half by five vertical lines. The space surrounding the circles is filled with stacked zigzags below and combinations of horizontal lines and zigzags to either side. On the short sides the major images are vertical multiple zigzags, with groups of horizontal lines alternating with angled strokes below. The rectangular lid is decorated on the upper face with zones of zigzags between lines, and on the underside with multiple zigzags between lines, arranged crossways.
On either side of the opening, in line with the division of the circles, are two small beak-spouted juglets. Both juglets have been broken and reattached, with one badly worn. They are also incised with decorative lines, and are positioned to face in opposite directions. At one end is a small plank idol figure. There is the stump of a lost figure at the opposite end, which most likely would have been another plank idol. The remaining plank idol has incised detail including a face, and contrary to most other examples, is facing outwards. Pairs of plank idols are more often found facing each other, outward facing idols are very rare.