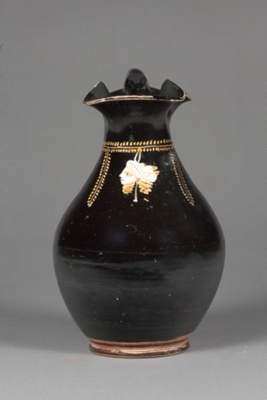 About this objectThe oinochoe jug's name was derived from its function, pouring wine. Oinochoe came from the Greek terms οἶνος, meaning "wine," and χέω khéō, "I pour."

The painter of this vase is not identified. It seems to have been painted by the Painter of Lecce 1075, but the style is also similar to that of his pupil, the Painter of the Louvre Bottle. Both of these painters were major figures in the production of Gnathian pottery of the middle phase and, it seems, were instrumental in popularising the scheme of masks hanging within a frame.

The vase features a comedic theatre mask of a hetaira (a courtesan), painted on the shoulder of the vessel. The sakkos (head-covering) of the mask has a dot-filled border, while the front section is decorated with short strokes. The chin has a strong outline, making the end of the mask. Beneath the mask is yellow side-hair and strings, which would have been used to fasten the mask to the actor's head. The mask is suspended from a garland, and set between two descending garlands. The garlands are all washed over to make them yellow.

The choice of a hetaira mask as subject matter would have been appropriate in the context of the symposium (drinking party) through the link provided by Dionysos (Dionysus) as the god of both wine and theatre. He was also a figure in the immensely popular world of New Comedy. The theme of a drama often revolved around the interest of young men in hetairai; it can be presumed that the young men at symposion had a similar interest.

Subject and Association KeywordsSex in art