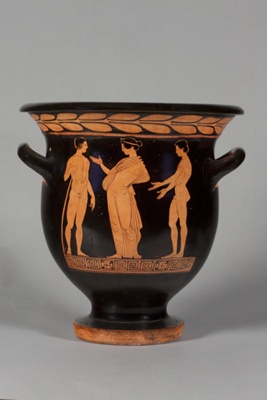 About this objectBell-Kraters, named for their bell-shaped bodies, were used to mix wine and water. Undiluted wine was exceedingly strong and was watered down until the alcohol was around 10% of the liquid, much lower than today's standards. The Greeks believed that only barbarians drank wine undiluted, as is evidenced by stories like Odysseus and Polyphemus - the barbarous cyclopes did not realise that the wine needed to be watered down.

Both sides of this vase appear to feature everyday scenes. Side A shows two naked athletes speaking to a woman, whose form is suggested beneath her chiton (a type of Greek dress). Meanwhile, the opposite side shows a similar scene with a trio of young men, all clothed.

This vase is attributed to the Cyclops Painter, an early Lucanian red-figure vase-painter who influenced on the Palermo and Karneia Painters. He was named by Arthur Dale Trendall after a vase in the British Museum of Odysseus blinding the Polyphemus.

MakerAttributed to the Cyclops Painter