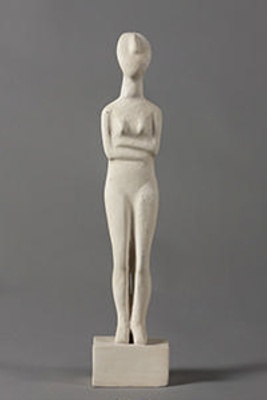 About this objectThe Cyclades are a group of small islands in the Aegean Sea, situated around the sacred island Delos. Formally an administration prefecture, many of the islands are known for the quality and range of their stones, and the sculpture that was being produced. In the period around 3200–2300 BC a distinctive civilisation, commonly called the Early Cycladic culture, emerged. It is best known for the pure white marble vessels and schematic flat figurines that have been found in the islands' burial sites.

The majority of Early Cycladic sculptures are representations of women, some of which are carved with natural proportions while others are more idealised. This figurine is an example of the Kapsala type named after an Early Cycladic cemetery on the island of Amorgos, and is one of the earliest of the "canonical" types. They are identified by their slender and elongated proportions.

It is clear that the sculpture was meant to be held or to lay flat as it is unable to stand without support. The function of these figurines remains an enigma, however as most are found in burials they are presumably related to the dead.